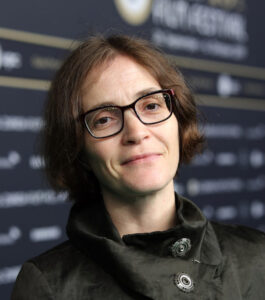 Born in Moscow in 1973, Kovgan has divided her time between Europe and the US working with dance and film collaborations on screen, VR and in theatre. She also brings a strong record as a documentary writer/editor.

Her film Nora has received 30 awards in every genre and was broadcast worldwide. She co-wrote/edited the Emmy-nominated Traces of the Trade: A Story from the Deep North (Sundance, PBS), Movement (R)evolution Africa (ZDF/ARTE) and edited My Perestroika (Sundance, PBS). Her first VR piece with Finnish music duo Puhti Devil’s Lungs won Grand Prix at the Vienna Shorts Festival, which made her an artist-in-residence at Vienna’s Museum Quarter 21 in 2019.