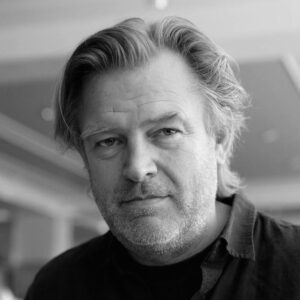 Born in Sandefjord, Norway in 1956, BENT HAMER is a director, writer, producer and owner of the film production company BulBul Film. After studying law at The University of Oslo he completed his education in Film Theory and Literature at the University of Stockholm and in film making at Stockholms Filmskola.

Bent’s feature films include the award winning O’Horten (2008), Factotum (2005), Kitchen Stories (2003) and Eggs (1995) which all had their international premiere at the Cannes International Film Festival. 1001 Grams (2014), O’Horten and Kitchen Stories were Norway’s entry for The Academy Award.

In 2013 Bent was awarded the Norwegian Amanda Honorary Award for his complete work.