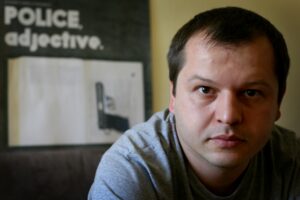 Corneliu Porumboiu was born in 1975 in Vaslui. He studied film at the I.L.Caragiale University in Bucharest and received his degree in 2003. The two short films he directed that same year drew international attention: A Trip to the City (Cinéfondation’s second prize in 2004), followed by Liviu’s Dream. In his first feature film, 12:08 East of Bucharest, Porumboiu offers a very humorous view of Romania’s 1989 revolution. The film was presented in Cannes at the Directors’ Fortnight in 2006 and won the Caméra d’Or. Corneliu Porumboiu carried on subtly combining his work on cinematic form with a dissection of the Romanian society in Police, Adjective, selected for Un Certain Regard in 2009 (Jury Prize and Fipresci Prize).