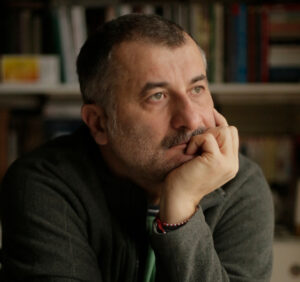 The screenwriter and director Cristi Puiu was born in Bucharest, Romania in 1967 and is regarded as the initiator of the Romanian New Wave. His feature film, The Death of Mr. Lăzărescu (2005), won the Un Certain Regard award at the 2005 Cannes Film Festival and was nominated in two categories for the European Film Awards. Aurora (2010) won three Gopos (Romanian film awards) in 2012, while Sieranevada (2016) screened in competition at Cannes in 2016.

His last feature film, Malmkrog (The Manor House) had its world premiere at the 70th Berlinale, as opening film of the new competitive section, Encounters, and winning the Best Director award 2020.