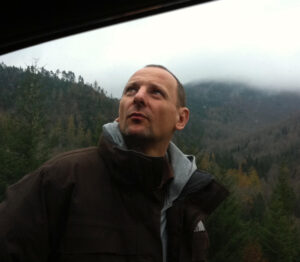 Damien Odoul was born in 1968 and is a multi-disciplinary artist who has distinguished himself in film, but also through his poems and photographs. Leaving a childhood he deems “sad” behind him, as a teenager he immersed himself in writing and photography which taught him the rigour of framing. Ahead of his peers, he was only 23 when made his first feature film, Morasseix (1992), in which he played the title role. This romantic drama remained unseen until it was shown at the Giornate degli Autori in Venice, in 2004.

Although he acts in most of his films, Damien Odoul remains a discreet film-maker with no limits. He continued his career as a director while turning towards literature and image for an exhibition, Virtual fight et lymphatique, in 2007. Ten years later, he stayed at Villa Kujoyama to construct his Oneiros ou l’homme qui revient (Oneiros or the Man Who Came Back) project and proved he is an accomplished artist by combining documentary with a previously-unseen sound and visual installation. In returning to the Berlin Film Festival in 2021 with his experimental Theo and the Metamorphosis, Damien Odoul confirms his uniqueness in French film, by looking sensitively at his hero, who has Down’s Syndrome.