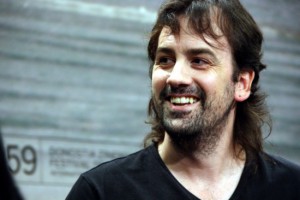 Isaki Lacuesta has been honored with the National Price of Cinematography of the Generalitat de Catalunya in 2012 and has directed several feature films, especially “The double steps”, awarded with the Golden Shell 2011, main prize in San Sebastian International Film Festival, and programed in 2012 in the MOMA of New York, the documentary “The Clay Diaries” (2011, Golden Medal in FIPA Biarritz), “The Damned” (2009, Fipresci Award in San Sebastian IFF), the documentary “All the night long” (2010), “The Legend of Time” (2006, Rotterdam IFF, recognized as the Best Spanish film of the year by the Catalan Critics Association, and best Spanish film of the decade for Rockdeluxe) and the documentary “Cravan vs Cravan” (2002, described by Spanish critics as the best first film of the year).