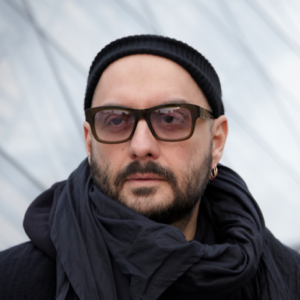 Born in Rostov-on-Don in Russia in 1969, KIRILL SEREBRENNIKOV turned to theatre in 1992 after studying science at university.

Winner of several awards for his work in television, he has also directed feature films. Playing the Victim (2006) won him the Grand Prize at the 1st Rome Film Festival in 2006. His success was followed by Yuri’s Day (2008), which won awards both at home and in the international arena.

Since 2012, he has been the artistic director of the Gogol Center in Moscow, and described as one of Russia’s leading theatre directors. His daring, impertinent theatre shows a great freedom and spirit of resistance. Outside is his third creation for the Festival d’Avignon, after The Idiots and Dead Souls.

Tchaikovsky’s Wife marks the fourth time in a row for Serebrennikov at the Cannes Film Festival, after the virtuoso delirium Petrov’s Flu (2021) and the rock ‘n’ roll biopic Leto (2018) also presented in competition, and the globally acclaimed thought-provoking religious drama The Student (2016) screened at Un Certain Regard.