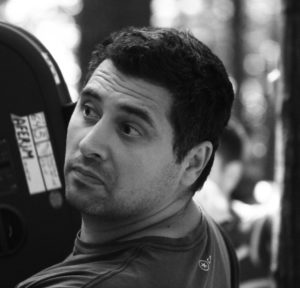 Born in 1977 in Romania, Radu Jude graduates from the Media University of Bucharest. Then he starts as an assistant director for feature films like The Rage by Radu Muntean (2002), The Death of Mr. Lazarescu by Cristi Puiu (2005) and Amen. by Costa Gavras (2002).

He later directs Everybody in Our Family (2012) as well as two short films, Shadow of a Cloud (2013) and It Can Pass through the Wall (2014), both selected in the Director’s Fortnight in Cannes.

Aferim! (2015) wins the Silver Bear for Best Director in Berlin, and Scarred Hearts (2016) wins the Silver Leopard and the Special Jury Prize in Locarno as well as the Silver Astor for best director in Mar del Plata. In 2016 Radu Jude directs Ingmar Bergman’s Scenes from a Marriage for the National Theater of Timișoara.