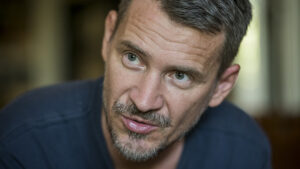 Born in 1972 in Debrecen, Hungary, Hajdu Szabolcs is director, actor and screenwriter, graduated from the University of Theater and Film Arts of Budapest in 2000.

The same year, he shoots his first film, “Sticky Matters” (Macerás ügyek), which won the Best First Film Award at the Hungarian Film Week and the Special Jury Prize at the Kyiv International Film Festival Molodist in 2001. His second film, “Tamara” (2003), won the Special Jury Prize for Best Visual Design at the Hungarian Film Week in 2004. “White Palms” (Fehér tenyér, 2006) is screened at the Directors’ Fortnight in Cannes, after at the 41st KVIFF where it obtains the Special Mention of the jury of the East of the West.